One for the Road! 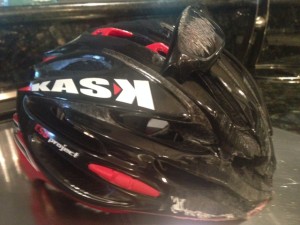 Yesterday I had a wake-up call in two important aspects of my life. The first was a reminder to be alert and not to take the simple things for granted. The second was to not be stubborn and to think past myself. I like to ride my Harley in Austin at my cabin by the lake, and I also like to ride a road-bike around the neighborhood in Houston. We usually race around, what we call our velodrome, with two or three other cyclist. We were intending 6 loops, but on the fourth loop I collided with the bike in front of me. I saw the car ahead. I even shouted, “Car,” as a warning to the others….but while I was assessing the situation, the rider in front of me was breaking! My response time was too slow. I bike often and have rarely fallen. I am guilty of day dreaming from the methodical pedaling and familiar scenery. At fifteen-seventeen MPH, I could have broken a limb. However, I was lucky to have skated away with a little road rash and some bruises to flaunt for a week or two. It reminded me, that even though something is familiar or routine, I should still keep my head in the game. Sometimes expecting the usual can get you hurt….

I insisted on continuing the ride, even though my co-rider pleaded we stop. I didn’t want to be weak, and I knew there was a mileage goal we agreed upon for the week. The next lap proved to be disastrous, because the concerned rider took a dive at the same spot. His helmet was destroyed, along with the eye glasses, and his face was peppered with bruises immediately following impact. He was so caught up in the near catastrophe of my earlier collision, that he missed seeing a parked car. We have all biked for years. This was a highly unusual day, and I think the stars were telling us to get off the road. We are all responsible for our actions, but in this matter I should have listen to someone’s earlier request to stop. I knew he was upset about my welfare, and my insistence to ignore him led to more damage for the day. I have a hard head, and luckily so does he, but next time I will remind myself that what really matters is that we all enjoy the ride.