Escape, Tip of the Spear Thriller Series, by Belle Ami 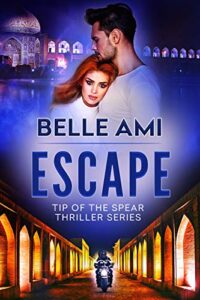 Belle Ami’s, Escape, Tip of the Spear Thriller Series is action packed, sexy, and will leave the reader thrilled that they picked it! I love that this author does her research. Steeped in political espionage that feels like the stuff of Tom Clancy, mixed with the heat and romance of her Out of Time Series, Belle Ami spins a tale deep in the Middle East that will have you sitting on the edge of your seat.

Layla Wallace is an intelligent, young university student who fancies herself on the brink of first love. Ignoring her father’s warnings about the turbulent waters of the region, she finds herself swept away by her Middle Eastern young admirer to Dubai. Meeting his parents might feel important, but the opulence of the much-awaited trip leaves Layla feeling empty and flat. Because of her hosts wealth, Layla and her boyfriend are targeted and kidnapped by an Iranian faction to raise money. It’s only afterward that she is identified as the daughter of a renown nuclear scientist and professor, Aleck Wallace. Terrified and worried for her own safety as well as her boyfriend, she is horrified to find out that she’s been abandoned in an Iranian prison.

Captured by one political group and then taken by a higher faction just before things come to the point of no return, Layla doesn’t know how to feel about her abductor and savior. Is she suffering from some sort of Stockholm syndrome, or is Cyrus Hassani more than he’s telling her?

I have to say, I was taken in by the intrigue of the story and the careful plotting of the author. There is nothing left untold and the weaving of the many threads from beginning to end will make you want to hold on to your seat and enjoy another ride. The twist and turns make you think things are finished just when they start again. Pay close attention to the lead in to this book because it will surprise you in the final wrap. I love the chemistry of Layla and Cyrus. Starting book two in the series now!