The Chanel Sisters, by Judithe Little (And Book Club Questions at the End, by Minette) 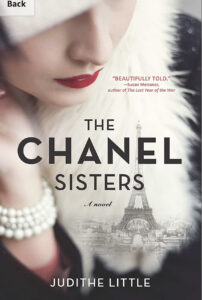 Wonderfully written and fantastically portrayed, The Chanel Sisters, is truly one of those books I didn’t want to put down or to end. Even better than Little’s debut novel, Wickwythe Hall, which was a masterpiece in itself, this story holds a bit of scandal and intrigue that has you routing for the women’s suffrage movement. I’ve never been more intrigued about the life of Coco Chanel. I highly recommend the Audible version. The reader had an amazing French accent that put me right in the center of early 1900’s France. With the story telling ability of Sara Waters and Philippa Gregory, Judith Little takes a fictional turn at spinning the life of Coco Chanel through the eyes of her younger sister, Antoinette. Impoverished, struggling, with the desire to be ‘better’, the Chanel sisters are the true winners against the societal rules of their time. Romance has never been so poignant. I can hardly wait to see what page in history this author turns to next! I can’t recommend The Chanel Sisters enough. Delightfully BBC material.

(So far, I haven’t found official questions for this book, so I formulated a few for my neighborhood book club.)

The Chanel Sisters, by Judithe Little

(Spoiler alert! Don’t read the questions until you have read the book!)

1.The story starts in Aubazine France, after the death of the mother, when all three girls (Gabrielle (Coco), Antoinette, and Julia) are abandoned at the orphanage by their father. How do you think you would have fared in the shoes of the Chanel sisters, being separated from their two brothers? The boys were given to a peasant family as free laborers. Who do you think fared better in that situation — the males or the females?

2.Gabrielle (Coco) Chanel’s story is told through the eyes of Antoinette, but Julia is also her sister. What happens to Julia and why do you think Antoinette’s vision was more appealing to the author/reader? What do you think about Gabrielle statement, that she wanted to be something better?

3.Where do you see early impressions that possibly led Gabrielle Chanel down the path to fashion? What did she really longed to be? Their aunt, Adrienne, was only a year older than Coco and made a big impression on them. When their paternal grandmother took them for a visit, do you think their time in the park, watching the “Elegante” might have driven the girls in a certain direction?

4.Raised in a convent in Aubazine, why were Gabrielle and Antoinette moved to another convent in Moulins? What do you think their impressions were of the uniforms for the wealthy verses the poor? In an attempt to blend in, the girls tailored their own uniforms. Gabrielle was very particular about how clothes fit, and the nuns were impressed. Do you think this experience made Gabriella understand how people judged importance by attire? Was this possibly the first instance where we see her need to be recognized? Isn’t it interesting that she resists her artistic talents as a means of success and only uses it as a means to get by?

5.Coco wanted to be a singer and paid for lessons while she was a seamstress. It was at this time she met Etienne who encouraged her to sing. After spending all her money on lessons, and trying hard for years to get a role that might shoot her to stardom, what do you think about her giving up and leaving Antoinette? At twenty-three Coco became Etienne Balsan’s mistress. Do you think she loved him? Was there anything else she could have done at the time to escape poverty?

Trivia: (answers not in the book)

1.Why did the author, Judithe Little, name the book The Chanel Sisters?

2.How old was Antoinette when she died?

***The author of this book suggested another great read— The Woman Before Wallis, by Bryn Turnbull…it’s about famous influential people such as the Vanderbilts and Prince of Wales.

1.It was what she called the book as she was writing it. This is often the case while an author writes a story. Little said that they couldn’t come up with a better name, so they stuck with the name she’d been using since the beginning. The title tells the reader that it’s not just another Coco Chanel story.

Questions for this book club discussion were formulated by reading, The Chanel Sisters, listening to an interview with Judithe Little, and resourcing Wikipedia.

The Sweet Goodbye, by Ron Corbett

The Sweet Goodbye, is the first installment in the Danny Barrett Thriller Series, by Ron Corbett, and if this book is any indication of how the subsequent novels will read, I’m all in. I heard about this book through...