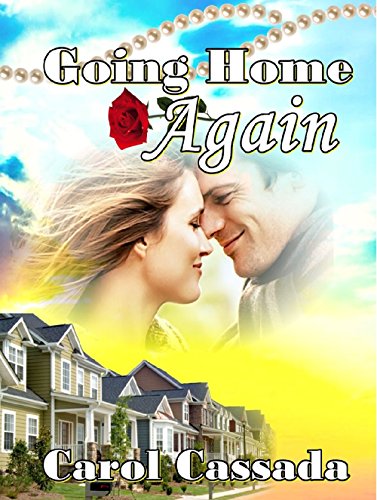 Going Home Again, by Carol Cassada, is a feelgood romance wrapped up in the torn paper of Rachel’s loss, heartache and hardship. Things were perfect until her mother died and left Rachel, her sisters and grandmother struggling with grief. When Rachel goes home for the funeral, her current love, Jeremy, goes MIA. Trying to be the strong sister, she muddles through the weekend reconnecting with her siblings and grandmother. Though Jeremy doesn’t answer her calls or text, she makes it through without his support.

Rachel’s career as a fashion photographer at Vogue is important to her, and she feels that she made the best decision by refusing her high school sweetheart’s proposal. The chance to have a different life in The Big Apple is worlds apart from the small town she grew up in. Rachel knows leaving Virginia was the right thing to do, but when former sweetheart, Cole, shows up at the funeral, Rachel is transported back to the memories she left behind. As Rachel’s employer nips at her heels and her assistant tells her about Jeremey’s possible infidelities, Rachel’s ties to New York unravel. An email from Cole opens the door to a connection she thought was long severed, but fate seems to draw them together again. Caught up in her own emotions from the past, will she be swept home again? With all the warmth of a Hallmark Original Movie and characters that blend like Little Women, Carol Cassada weaves a feelgood romance that is a balm to the reader’s heart.