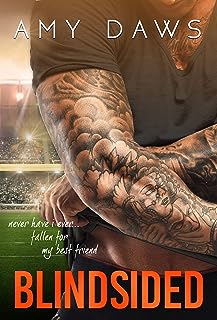 With almost 2,500 reviews and an almost five-star rating for Blindsided, I doubt author Amy Daws needs my two cents on her beautifully written, hilariously funny, and highly entertaining rom-com. But, because I try to review every good book I read, this one is a must. So here is my take on the spinoff story of Mac and Freya from the hot, hot, hot Harris Brothers Series.

Freya Cook is almost thirty, lives in London, has a job she loves and a best friend that most women would give their left breast to shag, but unlike most women, Freya isn’t into happily-ever-after. She is perfectly happy living alone with her fat and sassy cat, Hercules, in her small, cozy flat where she loves to watch, Heartland, with her famous footballer friend, Mac Logan. Never mind that she doesn’t know that Netflix and Chilling with your BFF can end up with an entirely different version of watching the telly. His famous footballer status, their constant bickering, and his annoying nickname for her, Cookie, assures her that she holds a solid position in the friends zone.

After a game of Never Have I Ever gets out of hand at a party, and Freya drinks to every naughty thing that she can’t even imagine, Mac gets angry and swoops in to take her home. When Freya confesses that she’s an almost thirty-year-old virgin, Mac comes up with a plan that might just benefit the besties in a way they’ve never, ever tried before. However, friends with benefits has a steep price, and though the heat is off the charts, Mac’s life events might scorch Cookie’s new taste for “The Sex.”

This was truly a fun story with a heartfelt plot, a beautiful London setting, and characters you won’t want to put down. I hope to see more of Mac and Freya in Daws’s other upcoming novels. This was my favorite romcom of the year!