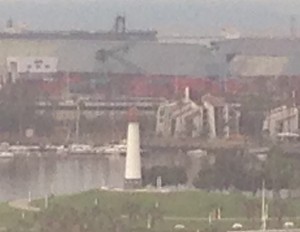 I couldn’t get that old song out of my head yesterday, so I googled it to play. As I was listening to it, my fingers tapped at the keyboard and I learned more about the life of Sam Cooke, Father of Soul. This song was before my time, and I hate to admit I didn’t know who sang the song I kept humming. The interesting fact was I was not far from the place he died. The day before I could hear children playing in my room. What was odd was that it was the same chanting sounds over and over for about two hours! Do you think this room might be haunted? I know… I have a fanciful imagination, but that’s why I am a writer. The story of Sam Cooke did interest me, and I am very moved by his music. They are doing a movie about him now, and I will be sure to see it. I thought I would post a picture of the plane today for my journey home, but this lighthouse in the harbor kept beckoning to me…maybe Sam Cooke was there.

I once saw a fortune teller in the French Quarter when I was only sixteen. I looked older than my age, so he gave me a full read about my romantic life as well as my career. I didn’t believe a word he said, because I didn’t want to at the time, but Colo if your out there….You were right! He told me my life would be lived in threes, like the lines in my palm. I started and stopped university three times before I graduated. I started and stopped two serious relationships, and now remarrying… hopefully my third and last relationship! I think G is my soul mate. We never argue and are quite happy doing anything or nothing. He’s my best cheerleader, and has helped me to pursue a writing career. This is my third book publishing attempt and it looks like it just might be my lucky number. Colo also told me I would bounce around and not find a career until late in life, but he said my name would be a household word. I hope he was right on that count. Move over Nora Roberts!

Actually, I would love to thank Nora Roberts for imparting a few words of wisdom at a RWA convention eons ago. She said if I wanted to be a writer, wake up everyday and write before doing anything else. She told me to treat it as an eight hour job and not to ever stop. It got me through my second book, but then I fizzled out. I never forgot her words, and they prompted me to start a third round. Like a favorite school teacher, Nora’s words will always prompt me to try.