Race for the sun is on pre order! 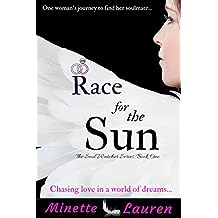 Alas, the long awaited time has come! Race for the Sun is on pre-order now!

Alley was starting to feel like she was on a reality television show with all the skeletons in her closet, falling at her feet…

Ally internally sighed with relief. Travis hadn’t seen the portrait yet, which meant he also hadn’t encountered Marcel. Now how would she distract him and get him out of there before Louis answered? It was too late. She saw people gathering at the outskirts of their small circle gawking at Travis’s likeness to the painting.

Marcel could be heard from a mile away as he spotted Ally. She cringed. Here goes nothing.

“Darling! You didn’t tell me David was coming! You little devil, trying to hoard them all for yourself.” He snapped his fingers in the air, appearing not to know which man to devour first. His eyes glinted playfully. “Call dibs quick, before I dib them both.”

Ally tried to ignore the rush of heat climbing from her shoulders to her cheeks. Both men looked confused and wary of Marcel’s proclamation.

“Marcel, this is Travis, and you remember Louis from the airport?” Ally tried to cover her discomfort by taking a long sip of her champagne.

“Travis, hmm, well I like David better. Mind if I call you David?” Marcel batted his eyes and linked arms with Travis playfully.

Ally almost sprayed her champagne onto the floor when she saw Travis’s blank look. She could tell he was uncomfortable but trying to be polite. He didn’t know the dynamics of the group at hand, and his eyes pleaded with Ally to save him. She let Marcel whisk him off to the room where David was displayed. If she was uncomfortable at his sudden appearance, then he could be uncomfortable with Marcel. She hated that the gig was up, and now Travis would know exactly how he had plagued her sleep.

Louis cleared his throat then let out a small laugh. “I fear your Travis is in for two surprises,” He tipped his glass toward the departing duo.

Ally giggled a little too hysterically. Maybe she should cut herself off. Yes, it was definitely one too many, and it wasn’t the champagne she was referring to.

Soledad, an old soul, confronts the failures of her last life, having committed suicide when things became too difficult. As she moves forward into the soul-watcher’s phase of the afterworld, she picks from a list of struggling souls to guide and guard. Ally, a popular artist and Soledad’s niece from her former life, is among Soledad’s choices. Trapped in a soul-watching state, Soledad follows Ally, throughout parts of her daily routine, trying to surmise her embodied ward’s purpose. Once she can master the meaning of Ally’s reality, Soledad hopes to be granted another life with her own soulmate. Journey with these very real characters to find what lessons are learned in the passing of time and the rewards their love brings. Race for the Sun is a lesson on life and loving for all.